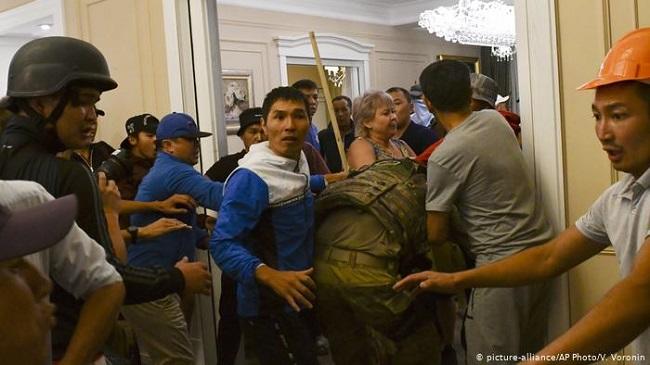 Kyrgyz law enforcers have begun to push back supporters of Kyrgyzstan’s former President Almazbek Atambayev from Bishkek’s central square. Law enforcers are using stun grenades to disperse them, a TASS correspondent reported from the scene. Shots are heard in the Ala-Too Square area.

Earlier reports said that several hundred supporters of the former president had arrived at Bishkek’s central square on Thursday.

Kyrgyz special forces’ operation to detain the former president, who was charged with corruption and stripped of immunity, began on Wednesday and lasted for almost 24 hours as law enforcement officers faced strong resistance from Atambayev’s supporters defending his residence in the settlement of Koi-Tash. A special forces member was killed during the operation, while 98 people were injured in clashes between Atambayev’s supporters and law enforcers. The second attempt to storm the residence followed on Thursday. Several thousand police and commandos were involved. Kyrgyzstan’s President Sooronbay Jeenbekov said that Atambayev had violated the country’s Constitution by offering armed resistance to law enforcers.

Atambayev who served as Kyrgyzstan’s president from 2011 to 2017 was the first Kyrgyz leader to step down after his first term of office expired. In the spring of 2018, Atambayev admitted that he had profound disagreements with incumbent President Sooronbay Jeenbekov.