5 things to do in Budapest during winter 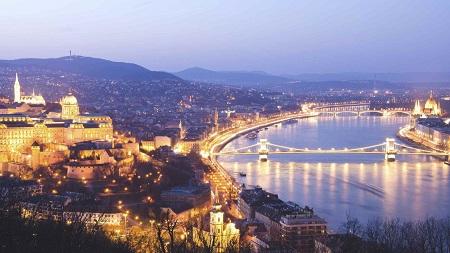 Rich in culture and steeped in tradition, winter here not only feels like a fairytale, it looks like one, too.

An array of seasonal delights draw visitors from around the world to the "Pearl of the Danube," all chasing that magical travel experience.

Its Christmas markets and outdoor ice skating rinks help to create a perfect winter wonderland, while the local spas and thermal baths offer a twist on outdoor bathing.

But the pièce de résistance of the winter season has to be securing tickets for the latest performance at the renowned Hungarian State Opera House.

Central European Christmas markets are what dreams are made of, but Budapest's offerings are a cut above the rest. Mulled wine, Christmas strudel, traditional dishes and arts and crafts line the stalls at both the Vörösmarty Square and St. Stephen's Basilica Christmas markets.

Taking place from November until early January each season, the markets welcome large visitor numbers from right around the world and deliver an authentic Hungarian Christmas experience you'll never forget.

The Vörösmarty Square market is one of the most popular in central Europe as well as one of the oldest in Hungary. Famous for its traditional Hungarian foods, including lángos, chimney cake and local sausages, you'll have a plethora of goodies to choose from at the more than 120 stalls.

Meanwhile, the St. Stephen's Basilica Christmas market sits in front of the spectacular Basilica building, with over 160 stalls full of cakes, sweets, arts and crafts, mulled wine and traditional Christmas gifts. Admission to both markets is free.

Budapest's City Park Ice Rink is by far the most famous skating destination in the region, if not Europe. Nestled directly in front of Vajdahunyad Castle on the edge of City Park, skaters flock to the rink each winter between late November and mid February.

First opened in 1870, this ice rink one of the oldest and largest in Europe. It's filled up with water during the summer months and serves as a boating lake for tourists looking to pedal around while basking in the sun.

Just a stone's throw from Heroes' Square and Széchenyi Baths, the City Park Ice Rink is the perfect way to end a day of sightseeing and soaking up the steam in the nearby spas.

Budapest is quite rightly nicknamed the "City of Spas," thanks to its 118 natural thermal springs that deliver 70 million liters of therapeutic waters each day to more than a dozen spas. The Turkish baths of here are astonishingly beautiful, renowned the world over for their relaxing and medicinal benefits.

Taking a dip in the famous Széchenyi Baths during winter is an experience like no other. Jumping from one of the 10 indoor pools to the outside bathing area is a memorable -- and even pleasurable -- jolt to the system.

Covered with over 39,000 lights, the Budapest Christmas "light tram," or Fényvillamos, is put into operation across the city from 5 p.m. each evening throughout December and early January.

A quirky and novel attraction, it certainly gets visitors into the Christmas spirit while taking in the sights of Budapest during the winter months. The 50-year-old Ganz UV tram mainly circulates on tram line 2, but it does run on other lines in other parts of the city.

No special tickets are needed to ride the tram, standard tickets are valid for travel. There are no services on Christmas Eve and New Year's Eve.

Buda Castle and Várkert Bazár are the jewels in Budapest's crown. The iconic Buda Castle is a powerful, beautiful and imposing building that overlooks the city, while the Castle Garden, or Várkert Bazár, brings together art and nature with a selection of bars and restaurants and a space for outdoor events.

Both venues offer concerts, literary events, theater and ballet productions all year round, but the winter season is a highlight thanks to its Christmas advent calendar. Throughout December, the castle grounds showcase performances by local poets, authors, actors and ballet dancers.