'Should We Punish Football Clubs for Being Successful?' - Interview 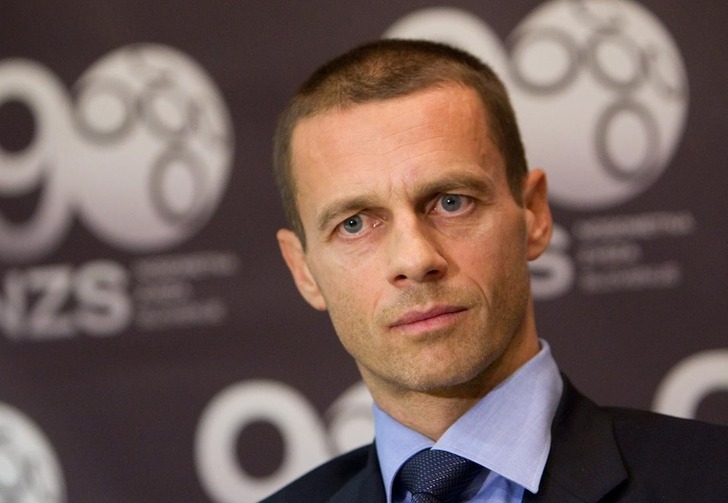 In an interview, UEFA President Aleksander Ceferi discusses corruption in football, plans for a new Champions League and the decision to play the Europa League final in Baku, Azerbaijan.

DER SPIEGEL: Mr. Ceferin, the aftershocks from the FIFA scandal can still be felt while the Football Leaks revelations uncovered tax evasion and back-room deal-making. Since you were elected UEFA president in 2016, has there been even a single day when you haven't been lied to by a functionary?

Ceferin: (laughs) That's hard to say. Probably yes, there were days when nobody lied. But often, you only learn much later if someone told the truth or not. That's similar to my former job as criminal defense lawyer.

DER SPIEGEL: How can football win back the trust of the fans?

Ceferin: European football is an important industry. And because there is so much passion connected to it, these things get much more attention than in other industries. I can only tell you that UEFA really is a clean organization. Of course, there are things that I see from time to time which we try to repair. But when you ask a normal fan, he just throws FIFA and UEFA together and says: You're all corrupt.

DER SPIEGEL: Are you annoyed by that?

Ceferin: I don't want to explain anymore. What do those people really know about how we work? We are not corrupt. I have a salary, I don't get secret money on the side. I don't do backroom deals.

DER SPIEGEL: You will, of course, be held to your words.

Ceferin: Of course. After my election, I was only worried about my tax situation, working in Switzerland and living in Slovenia. I said I cannot make a mistake on taxes. In the football world, most officials fail because of their greed. They keep more money than they're allowed.

DER SPIEGEL: The president of the German Football Association (DFB), Reinhard Grindel, was forced to step down because he failed to report earnings and accepted an expensive watch as a gift. What is your view of this affair?

Ceferin: I felt really sorry for Reinhard. He was naive, yes, he made mistakes. But he is not a corrupt person, I really believe that. And he took consequences -- something that some in football didn't do for a long time.

DER SPIEGEL: It initially seemed like Grindel was trying to hang onto his lucrative posts at UEFA and FIFA.

Ceferin: He visited me and we cleared things up within 15 minutes. I told him my opinion and he agreed with me. It's not always easy in my job, I can't call one of my juniors and tell them this person needs to step down. This is the part that I have to do. But it's like Harry S. Truman once said: If you can't stand the heat, stay out of the kitchen.

DER SPIEGEL: More recently, you've been facing backlash because of the location of the Europa League final. Why did you choose Baku?

Ceferin: Why? Because people live there. They love football. We have to develop football everywhere, not just in England and Germany.

DER SPIEGEL: The regime in Azerbaijan arrests human rights activists. By staging the final in the country, you are essentially legitimizing the regime.

Ceferin: The human rights situation is a problem. But there are issues with human rights in other European countries as well. Do you think that fans in Baku don't deserve to see live football because of that?

DER SPIEGEL: The two finalists, Arsenal and Chelsea, were only able to allocate 6,000 tickets each to their supporters. Plus, fans wanting to attend the final have to make a long and expensive journey.

Ceferin: As far as I know, the clubs even returned some tickets because they couldn't sell them all. By the way, I was told that Easyjet raised airfare for the flights. Does anyone ask them? It's always supposed to be UEFA's fault. That's populism. How about providing a constructive proposal, a fund, to which every club contributes to support fans traveling to the finals. Of course, Baku is far away from London. But when we decided the finals location, we couldn't have known that both teams would be coming from England.

DER SPIEGEL: Arsenal decided to leave Armenian player Henrikh Mkhitaryan at home for political reasons. The club is concerned about his safety should he travel to Azerbaijan, which is hostile towards Armenia.

Ceferin: Azerbaijan provided guarantees and a thorough security plan. In the end, it was the player's decision not to travel. If we let tensions stop football, nothing can be organized any longer. We also organized a safe European Championship in France, when France was a target of terrorists.

DER SPIEGEL: Do you see it as problematic that four English teams are in the finals?

Ceferin: No, it's not problematic and I don't think it will happen again next year. This season could have gone differently. Ajax almost made it into the final.

DER SPIEGEL: The underdog Ajax beat Real Madrid and Juventus. Wouldn't you have liked to see them in the final?

Ceferin: It may sound boring, but I don't care much about who makes it to the final. I would just like to have a nice and peaceful final, where we don't have problems, that we have a beautiful event. The stadium will be sold out anyway, we have 15 times more requests than we have tickets.

DER SPIEGEL: You have developed a plan to reform European club competitions and presented it to representatives of the European leagues. Why does anything need to change at all?

Ceferin: If it was up to me, nothing has to change. Football is the only European product that is by far the best in the world. The Champions League is global. It's rising in China, it's rising in the States. Those are the emerging markets for our sport. In Europe, there is hardly more to be made.

DER SPIEGEL: So fans in countries outside of Europe are more important because there are more of them and they have more money?

Ceferin: No, all fans are important, including the ones in Europe. But why do you think a Chinese fan doesn't deserve to be treated well? They're nice people. They love their clubs. They love our competition.

DER SPIEGEL: The European Club Association (ECA) wants to reform the Champions League. Domestic leagues like the one in Germany are concerned that such a move could prove disadvantageous.

Ceferin: I don't want to speak about the specific parts of the ECA idea. We are in a consultation phase and we all need to talk with each other. The ECA presented their idea to us. Then, at UEFA, we immediately scrapped the idea of playing European Cup games on the weekend. This will not happen. Next, I want the ECA and the leagues to sit down at one table, I want to see how they talk to each other. Everything is being dramatized already. The usual suspects are shouting, talking about the murder of football and calling for more solidarity. The latter is actually a good idea: I think the five biggest leagues should give money to associations in small countries if they sell broadcasting rights for their matches there. Because with these TV broadcasts, they damage the leagues in the smaller markets.

DER SPIEGEL: Should large clubs like Barcelona, Bayern or Juventus receive a guaranteed spot in the Champions League?

Ceferin: No, no. But they are there anyway. The middle-sized clubs would profit from the reform. But I'm not sure if this current idea will be implemented exactly as it is.

DER SPIEGEL: UEFA already provides more support to successful clubs than it does to others.

Ceferin: Should we punish them for being successful? I don't think that's the right way. We should not forget that the big clubs bring in the majority of UEFA's revenues.

DER SPIEGEL: It's a vicious circle, though. Successful clubs earn more money, allowing them to buy better players. That, in turn, allows them to stay successful and make even more money.

Ceferin: I agree with you there. We have to do something about competitive balance. But how do we do it? EU law prevents a salary cap. What we can do is to regulate the number of loan players more strictly and reduce roster sizes. There's also the idea of a luxury tax. According to that concept, you could invest, for example, 200 million more, but you'd then have to pay 100 million toward the rest.

Ceferin: And who's fault is that? Mine?

Ceferin: Check Bayern's budget. How much of their money comes from UEFA?

DER SPIEGEL: It's all linked together. Bayern can attract more powerful sponsors because those sponsors know the club is full of stars and always plays on the biggest stage. That's why the club makes so much money.

Ceferin: And that's bad for German football? The stadiums are always sold out. Do people only come for the beer? They come because football is the most interesting game in the world. People want more of it. The semi-finals of this Champions League season were spectacular, completely unpredictable. And the final opponents Tottenham and Liverpool are not the richest clubs in Europe. So your theory falls here already. We can't tell the successful clubs: You're good, that's why we kill you, so that all are equal. Then they wouldn't be interested in competing anymore.

DER SPIEGEL: Do you think that Europe's biggest clubs would ever launch their own competition independent of UEFA?

Ceferin: No, that will never happen. The clubs know that this would be quite a boring competition. The domestic leagues are also important for the clubs to connect with their fans. I have told them that football is a school of life. You have to be humble, otherwise it can backfire quickly.