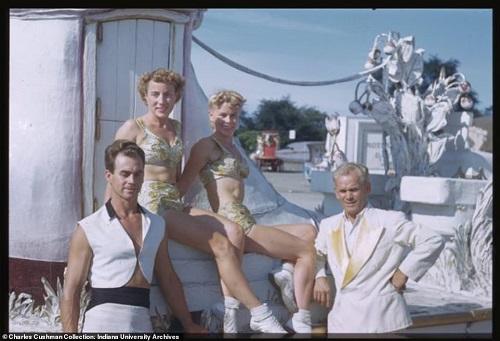 Stunning never-before-seen photos of the beloved Ringling Bros. and Barnum & Bailey Circus that traveled across America dazzling and shocking audiences in the 1940s have emerged, and the color photographs offer a rare behind-the-scenes look at troupe in its early days.

For decades Ringling Bros. and Barnum & Bailey Circus, also known as the Greatest Show on Earth, has spread laughter and excitement across the globe with their daring tricks, acrobats, and stunts with wild animals.

The group started as two separate entities in 1871 before joining forces in 1919 and together put on shows for decades before calling the final curtain in 2017.

Photographer Charles Weever Cushman, of Posey County, Indiana, followed the troupe in the late 1940s, capturing the daring actors, their training, and colorful costumes during their tour in Chicago.

He captured the photographs using Kodachrome, an early adopter of the revolutionary color process. His massive library of some 14,500 Kodachrome color slides is archived at the Charles W. Cushman Photograph Collection at Indiana University.