Russia is keen to restore cooperation with EU 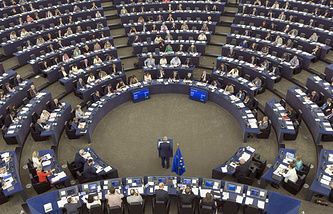 The European Parliament’s resolution on combating other countries’ propaganda delivers a serious blow to one of the pillars of democracy, freedom of speech, First Deputy Chairman of Russia’s Federation Council (upper house of parliament) Committee for Defense and Security Frants Klintsevich told reporters on Wednesday.

According to him, the document is reminiscent of the Cold War era. At the same time, in the senator’s words, "only 304 members of the European Parliament out of 691 have voted in favor of the resolution which means that less than 50% of the members support it."

"Basically, the Russophobic minority has trampled on freedom of speech as one of the main pillars of democracy," Klintsevich noted.

"This day, November 23, will go down in history as one of the blackest days of the European Parliament," he said with confidence.