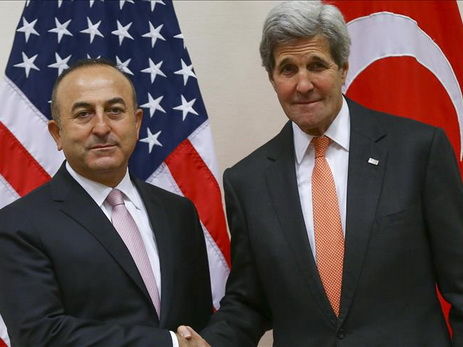 U.S. Secretary of State John Kerry and the CIA have apologized to Turkey over allegations in 2014 about oil trade between Ankara and the Islamic State of Iraq and the Levant (ISIL).

Axar.az informs, meeting with Foreign Minister Mevlüt Çavuşoğlu on the sidelines of a U.N. Security Council meeting in 2014, Kerry had said they had information that Turkey was importing oil from ISIL, a Foreign Ministry official told the Hürriyet Daily News, adding that Çavuşoğlu denied this claim at the time.

Çavuşoğlu told Kerry: “We know who gave you this information. Some Arab countries are reacting to us because of disagreements over the Egypt issue. They are conducting a campaign on the issue. This is a very serious accusation,” at the time, according to the official.

After requesting the document of the allegations in a number of meetings with Kerry, Çavuşoğlu was given a file that included information on coordinates in Turkey. The file was then investigated by Turkish intelligence agencies, and Ankara determined that the coordinates belonged to an asphalt worksite of Kilis Municipality, on the border with Syria.

After this information was conveyed to the U.S., Kerry apologized and the CIA filed a written apology to Ankara, said the official. He also refuted claims that the U.S. provided heavy weapons to the People’s Protection units (YPG) in Syria. “We don’t have such information, and the U.S. has also categorically refused the claims,” said the official.