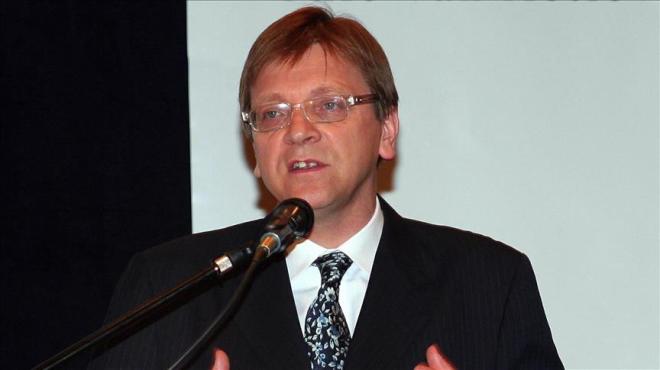 Former Belgian Prime Minister Guy Verhofstadt withdrew from the race to be the next president of the European Parliament on Tuesday, his group said.

Axar.az reports that, in a statement, his Alliance of Liberals and Democrats for Europe (ALDE) said it would be supporting the nomination of Italian Antonio Tajani -- virtually securing the presidency for the center-right European People’s Party (EPP) candidate.

“This is a first important step in the construction of a pro-European coalition to reform and strengthen our union, which is absolutely necessary,” Verhofstadt said in the statement.

“With Trump, with Putin, with many other challenges Europe faces, it is key we cooperate to reform our union.”

Verhofstadt described the ALDE/EPP coalition as a “coalition of ideas to change the direction of the European Union” and invited all groups in the parliament to join.

EPP leader Manfred Weber said the partnership was based “on content and on reforms for Europe.”

The EU’s 751 lawmakers vote Tuesday for a president to succeed German socialist Martin Schulz for a two-and-a-half year term.