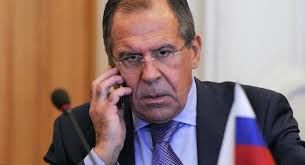 The European Union continues to be guided by the shortsighted and flawed logic in its relations with Russia forcing all partners to choose between Moscow and Brussels, Russian Foreign Minister Sergey Lavrov said at his annual news conference on Tuesday.

"We receive information through different channels, which suggests that the European Union does not consider the Eurasian economic integration association full-fledged seeing it as ideology-driven and dictated by Russia’s desire to gain a sphere of influence," the minister noted. According to Lavrov, many contemporary politicians do not want to the EAEU to be a success. He cited the situation with Serbia, which wants to negotiate with the EAEU, as an example. "Special Adviser (to EU Foreign Policy Chief) Federica Mogherini, Nathalie Tocci, said that Serbia’s relations with Russia were a major challenge for Serbia in terms of compliance with the EU’s foreign policy," Russia’s top diplomat noted.

"This shows that nothing has changed over the past 12 years or even more when Brussels believed any partner in Europe had to make a choice between Europe and Russia. Unfortunately, this flawed and shortsighted logic continues to dominate to date," Lavrov said.