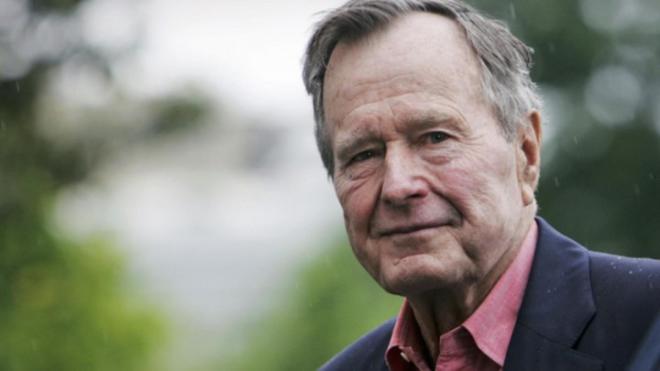 Former President George H.W. Bush and his wife could end up “six feet under” if they sit outside for Donald Trump’s inauguration this week, the former president wrote the president-elect in a personal letter.

“Barbara and I are so sorry we can’t be there for your Inauguration on January 20th,” the former president wrote in a note dated Jan. 10. “My doctor says if I sit outside in January, it will likely put me six feet under. Same for Barbara. So I guess we’re stuck in Texas.”

The elder Bush, who was not expected to attend over health concerns, was hospitalized this week in Houston, according to an aide, who told the Houston Chronicle that the 92-year-old was admitted to Houston Methodist Hospital after falling ill.

A spokesman later said Wednesday afternoon that Bush was admitted into intensive care “to address an acute respiratory problem stemming from pneumonia” and was sedated so doctors could “protect and clear his airway.”

“President Bush is stable and resting comfortably in the UCU, where he will remain for observation,” the statement said. “Additionally, Mrs. Bush was admitted to the Houston Methodist Hospital this morning as a precaution after experiencing fatigue and coughing.”

Trump tweeted that he is “[l]ooking forward to a speedy recovery” from both Bushes and thanked the former president for his “wonderful letter!”

In his missive, Bush said he and his wife “will be with you and the country in spirit.”

“I want you to know that I wish you the very best as you begin this incredible journey of leading our great country,” he continued. “If I can ever be of help, please let me know.”

Trump ridiculed Bush’s son Jeb Bush during the GOP primary, dubbing the former Florida governor “low energy.” None of the Bushes attended Trump’s nominating convention last summer in Cleveland, but Jeb and his father both congratulated the president-elect on his surprise election in November.