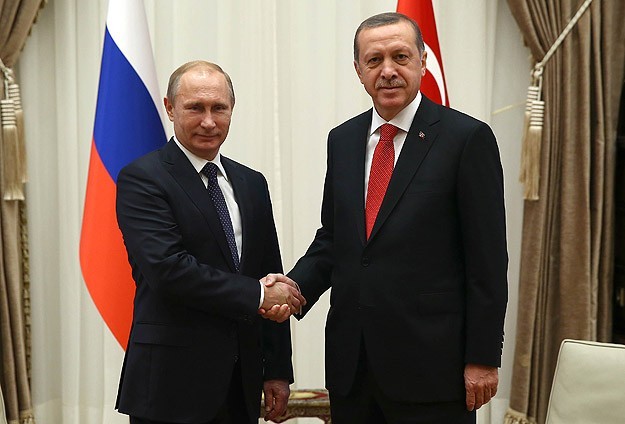 Russian President Vladimir Putin has held a brief talk with Turkish President Recep Tayyip Erdogan on the sidelines of the One Belt, One Road international forum, Kremlin spokesman Dmitry Peskov said on Sunday.

Axar.az reports citing to TASS Putin’s spokesman declined to specify what the talk was about.

"No, this can’t be done [to specify the theme of the talk], this was in continuation of the Sochi dialogue," Peskov said.
As the Kremlin spokesman said, the Russian leader also briefly talked with Mongolian Prime Minister Jargaltulga Erdenebat.

"The sides expressed mutual readiness to develop cooperation in very diverse fields," the Kremlin spokesman said.
The Russian president also held a brief meeting with President of Uzbekistan Shavkat Mirziyoyev, during which "the issues of bilateral cooperation were discussed and the work of the inter-governmental commission was touched upon," Peskov said.

The Russian president also talked with President of Kyrgyzstan Almazbek Atambayev on the sidelines of the forum, the Kremlin spokesman said.
The Mongolian prime minister’s visit to Russia is planned in the first half of 2017.