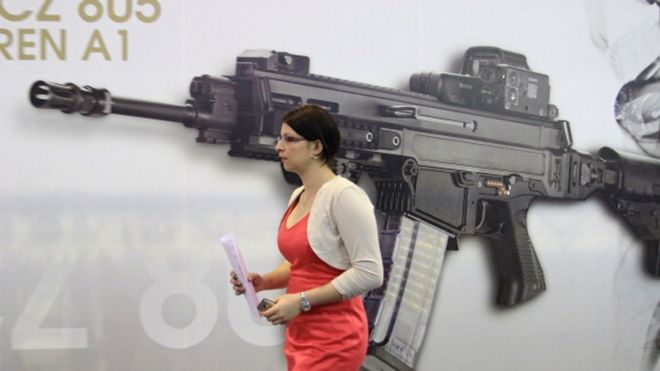 The lower house of the Czech parliament has agreed to alter the constitution so that firearms can be held legally when national security is threatened.

The amendment gives Czechs the right to use firearms during terrorist attacks.

It was passed by the lower house by a big majority, and is likewise expected to be approved by the upper house.

The move by parliament is a challenge to EU gun control rules which restrict civilians from possessing certain kinds of semi-automatic weapons.

The EU argues its move is a much-needed counter-terrorism measure.

But the Czech parliament took a different view, arguing that allowing people to bear arms enables them to defend themselves against terrorism.

"We don't want to disarm our citizens at a time when the security situation in Europe is getting worse," Interior Minister Milan Chovanec told parliament on Wednesday.

"Show me a single terrorist attack in Europe perpetrated using a legally-owned weapon."

The Czech Republic has no recent history of terror attacks, although other countries in the European Union have.

The European Commission agreed tougher gun control rules in December - they were approved by EU interior ministers four months later in spite of objections from the Czech Republic, Luxembourg and Poland.

In 2017, there were more than 800,000 firearms - many of them antiques in museums - registered in the Czech Republic, a country with a population of 10.6 million.

Many Czechs in rural areas also carry firearms for use when hunting.