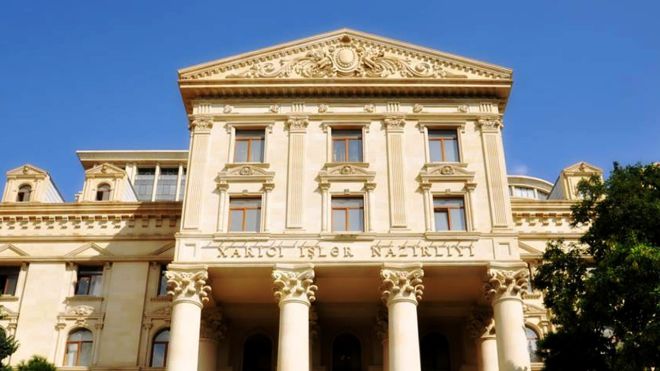 Azerbaijan and the OSCE have discussed cooperation programs as Azerbaijan's Foreign Minister Elmar Mammadyarov met with Secretary General of the OSCE Thomas Greminger.

Minister Elmar Mammadyarov underscored the great significance that Azerbaijan attaches to cooperation with the OSCE as a regional organization.

Noting the fundamental principle of indivisibility of security within the OSCE, Elmar Mammadyarov stated the importance of ensuring that all Member States are committed to their obligations under the Helsinki Final Act. In this regard, Minister Mammadyarov stressed that the Republic of Armenia, grossly violating the commitments undertaken by the Helsinki Final Act as a member of the OSCE, continues to use the force to occupy the Nagorno-Karabakh region and adjacent districts of Azerbaijan. The minister pointing out that the OSCE, since its establishment, was involved in the settlement of the Armenia-Azerbaijan conflict, stressed necessity of redoubling the efforts to change the status quo of occupation and to ensure withdrawal of armed forces of Armenia from the occupied territories of Azerbaijan.

FM Mammadyarov added that the illegal presence of the armed forces of Armenia in the occupied territories of Azerbaijan constitutes the primary threat to regional peace and security.

Recalling that the relevant UN Security Council resolutions and the Helsinki Final Act constitute the mandate of the OSCE Minsk Group Co-Chairs, Minister Mammadyarov stressed that Azerbaijan stands ready for substantive and intensive negotiations to achieve progress in resolving the conflict and ensuring a lasting and just peace in the region.

FM Mammadyarov briefed about the work done by Azerbaijan on furthering economic cooperation and connectivity, and the opportunities for a multi-modal transport infrastructure covering the region and the extended OSCE space. In this regard, he noted the East-West, North-South, South-West projects and the already commissioned Baku-Tbilisi-Kars railway route.

He added that these projects implemented with the participation and initiative of Azerbaijan contribute to economic development and prosperity in the OSCE area, as well as to the strengthening of regional peace and security.

At the meeting the role of parliamentary diplomacy as well as the cooperation with the OSCE Parliamentary Assembly was also noted.