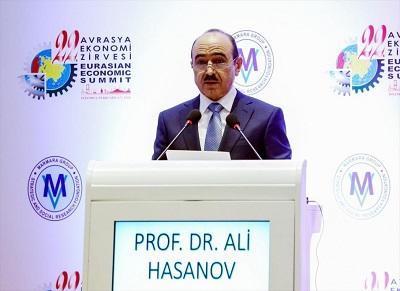 The summit brings together high-ranking state and government officials, former presidents, MPs, representatives of international organizations, public and political figures from nearly 40 countries. The event is being held under the slogan “Responsibility for the Future”.

Addressing the opening of the summit, the Azerbaijani President's Assistant for Public and Political Affairs Ali Hasanov read out President Ilham Aliyev`s congratulatory letter to the event participants.

The two-day summit will discuss a wide range of issues, including the development of technology and the future of humanity, the new dimensions of globalization.

Marmara Group Strategic and Social Research Foundation has been organizing the Eurasian Economic Summit as a peace and dialogue project for 22 years.