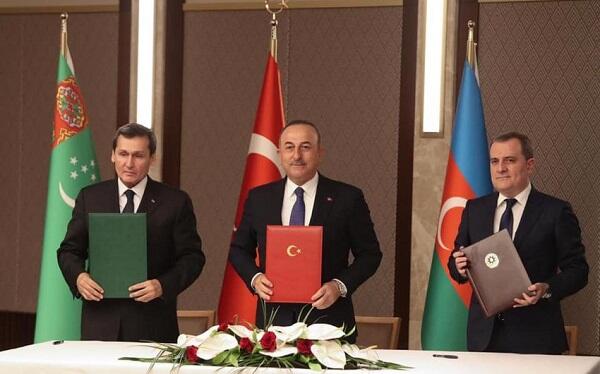 Axar.az presents the text of the Statement citing the press service of Azerbaijani MFA:

Affirmed their adherence to the joint statements adopted in the Trilateral Meetings of the Ministers of Foreign Affairs on 26 May 2014 in Baku, on 29 January 2015 in Ashgabat, on 28 August 2015 in Antalya, and on 19 July 2017 in Baku.

Reaffirmed their mutual respect and firm support for the sovereignty and territorial integrity of the States of the Parties within their internationally recognized borders.

Underlined their vision to create an inclusive space of peace, stability and shared prosperity and recognized the importance of using the Turkmenistan-Turkey-Azerbaijan trilateral mechanism to enhance the prospects of multilateral cooperation.

Underlined the importance of further strengthening of cooperation in the fight against terrorism, separatism, extremism and discrimination in all their forms and manifestations, transnational organized crime and illicit trafficking in narcotic drugs and their precursors, arms and trafficking in persons, crimes against cultural and historical heritage, cybercrimes and irregular migration.

In this context, noted the importance of the Organization of Islamic Cooperation’s decision to mark March 15 as “International Solidarity Day Against Islamophobia” and agreed on supporting all international efforts on this issue.

Underlined the utmost importance of the forthcoming Trilateral Summit of the Heads of States in Turkmenistan.

Noted the importance of strengthening trilateral economic cooperation, as well as the legal basis for economic partnership among the States of the Parties.

Agreed to support the further development of cooperation through the strengthening of the trade-economic cooperation, using the existing potential for promotion of investment and trade as well as carrying out joint projects and programmes in the field of customs, energy, transport, telecommunications, industry, agriculture, science, education, culture, tourism, and environment.

Noted the importance of the continuation of the existing cooperation between small and medium-sized enterprises of all three countries.

Resolved to continue and enhance their solidarity in tackling the Covid-19 pandemic including in supply of the coronavirus vaccine through mutual medical assistance within their means and capabilities,

Affirmed their commitment to cooperation and coordination in containing the Covid-19 pandemic and in managing its implications on social and economic activities with a view to mitigating its adverse effects on particularly international travel, trade and transportation,

Underscored the necessity of further strengthening the cooperation for the realization of new projects on the development of transport infrastructure and increasing the transit potential.

Underlined the significant efforts made to strengthen the transit potential of their countries, including the “East-West” Trans Caspian Transport Corridor and emphasized in this regard the importance of the effective operation of maritime transport between the ports of Turkmenbashi (Turkmenistan) and Alat (Azerbaijan).

Stressed the key role of the Baku-Tbilisi-Kars (BTK) Railway project as a part of the Modern Silk Road in facilitating competitive transportation between Asia and Europe and welcomed the preparations for passenger transportation via the BTK Railway.

Welcomed the entry into force of the Lapis Lazuli Transit and Transport Cooperation Agreement, which aims at developing trade relations by simplifying transportation and traffic in transit and constitutes a new dimension for regional connectivity.

Expressed the need to upgrade the existing infrastructure and to establish favourable conditions for the development of regional transport and trade.

Taking into account the contribution of infrastructure projects to the prosperity and stability of the Caspian Region, emphasized the importance of enhancing cooperation to ensure regional connectivity in transport and energy.

Underlined the significance of the partnership between the three countries in the sphere of energy and reaffirmed their support for energy projects aimed at the delivery of natural gas from Azerbaijan in increased volumes and of energy sources from Turkmenistan to Turkey and the rest of Europe.

Welcomed the signing of the Memorandum between Azerbaijan and Turkmenistan for joint exploration and development of the hydrocarbon field named “Dostluk” in the Caspian Sea. In this regard, expressed their readiness to conclude joint projects for the development and delivery of hydrocarbon resources to enhance the energy security of Turkey and the rest of Europe, as well as to contribute to the economic development and prosperity of Azerbaijan and Turkmenistan.

Emphasized the necessity to develop further cooperation in education, science, culture and other humanitarian fields based on the common heritage of three countries.

Underscored the importance of holding regular trilateral meetings with a view to continuing cooperation and coordination on political dialogue, regional and global issues.

Agreed to hold the next meeting in Turkmenistan. The date of the meeting will be agreed through diplomatic channels," the statement reads.