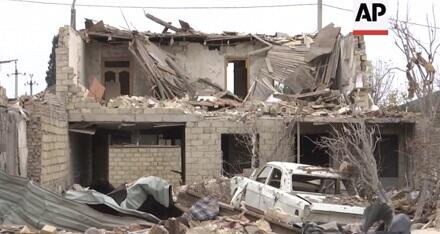 French lawyers Yasin Yakuti and Elise Arfi visited the area with residential buildings in Azerbaijan’s Ganja city, which was attacked with rocket fire by Armenia during the second Armenia-Azerbaijan Nagorno-Karabakh war.

Axar.az reports that the guests, accompanied by local officials, laid flowers on the territory as a sign of respect for the memory of those killed as a result of the Armenian terror.

A complete ceasefire and a cessation of all hostilities in the zone of the Nagorno-Karabakh conflict was introduced on Nov. 10, 2020.