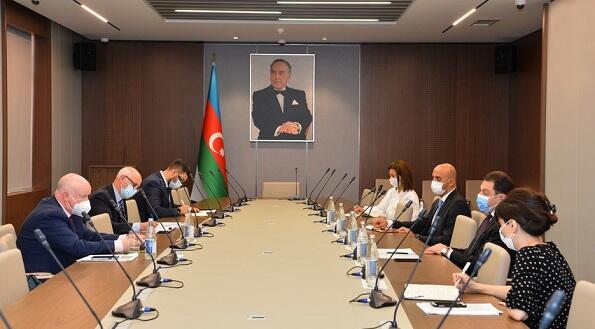 Azerbaijani Deputy Foreign Minister Elnur Mammadov has met with Paul Gavan, a member of the Committee on Migration, Refugees and Internally Displaced Persons of the Parliamentary Assembly of the Council of Europe (PACE) and rapporteur on the report on the humanitarian consequences of the conflict between Armenia and Azerbaijan.

Axar.az reports that according to the Foreign Ministry, the main topic of the report will be the prospects for a political solution, the involvement of the international community in the process, the fact that the liberated territories of Azerbaijan are one of the main mine-contaminated areas in the world. They exchanged views on issues such as their return to their lands.

PACE rapporteur Paul Gavan noted that his report will focus on the humanitarian consequences of the conflict, noting that he will make every effort to obtain as detailed information as possible during his visit and prepare a comprehensive report.

Deputy Minister Elnur Mammadov and PACE member Paul Gava, who is also a member of the Irish Senate, said in a final report that the conflict had left about 4,000 Azerbaijanis missing since the First Karabakh War. He stressed that the fact that Azerbaijanis have become refugees and internally displaced persons should be taken into account.