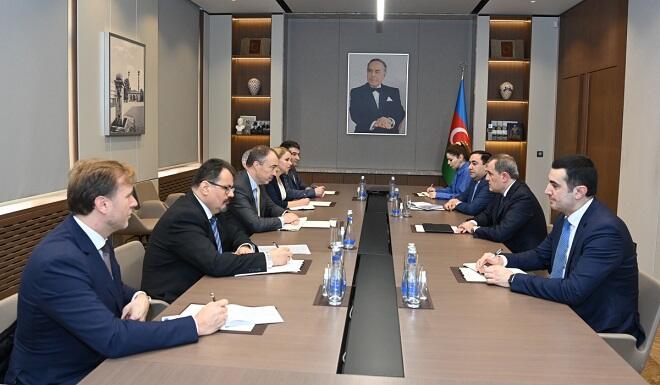 On November 26, 2022, the Minister of Foreign Affairs of the Republic of Azerbaijan, Jeyhun Bayramov, held a meeting with the Special Representative of the European Union for the South Caucasus, Toivo Klaar.

Axar.az reports citing the Foreign Ministry that during the meeting, the sides discussed the efforts in the process of normalization between Azerbaijan and Armenia and possible next steps.

Minister Jeyhun Bayramov informed the other party about the elements of the peace agreement prepared on the basis of the 5 basic principles presented by Azerbaijan and the discussions held in Washington on the comments of the Armenian side.

Detailed information was given to the other side about the fact that the Armenian side continues military activities against Azerbaijan in gross violation of the provisions of the Trilateral Statement signed between the leaders, the mine threat, and the discovery of new mines made by Armenia in 2021, a few days ago.

It was emphasized the importance of fulfilling the obligations to mutually open communications in the region and the fact that Armenia has not yet fulfilled its obligations in this direction. At the same time, the views of the Azerbaijani side regarding the reintegration of the Armenian residents living in Karabakh were brought to the attention of the other side.

Special representative Toivo Klaar said that the European Union intends to continue efforts to establish peace and stability in the region and open communications. He drew attention to the importance of the normalization process and result-oriented negotiations between Azerbaijan and Armenia.

During the meeting, the sides also exchanged views on Azerbaijan-European Union relations.