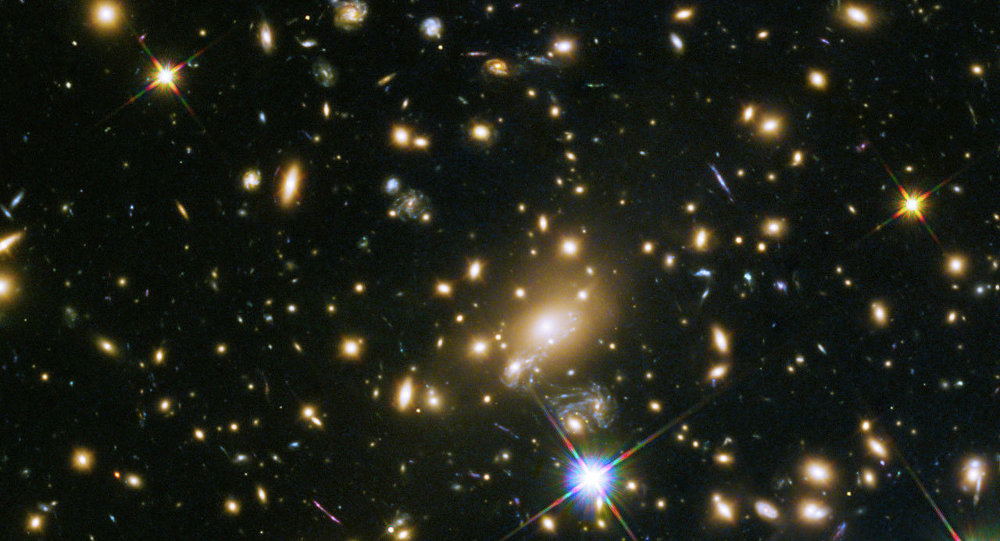 A cluster of stars, mysteriously isolated from the rest of the galaxy, is under investigation by Chilean astronomers. The cluster formed without explanation very recently, mystifying astrophysicists.

Axar.az reports that the cluster is SH2, about 62 million light-years from Earth in the Fornax Constellation. It is a cosmic baby, only about 100 million years old and consisting of about 100 star clusters. It exists entirely within a large and bright galaxy, Fornax A. Astronomers are baffled as to how many young stars could form in such quick succession.

"We used the Integral Field Unit of the VIMOS instrument, where each pixel of the field corresponds to a spectrum rather than to only one intensity value as in normal imaging. Therefore, this kind of instrument provides a very efficient way of gathering astrophysical information," study lead Tom Richtler told Phys.org.

Richtler's team's working hypothesis was that SH2 is a dwarf galaxy that had fallen into Fornax A in a process known as "infalling." There's a good deal of evidence to support this hypothesis. SH2 is the same size as a typical dwarf galaxy, and Fornax A has a reputation for gobbling up smaller clusters.

However, SH2 also has a much higher level of metallicity than the researchers would expect from a dwarf galaxy. This has led to a new hypothesis, that SH2 was once a massive molecular cloud that has recently begun to aggregate into stars.

"The metal content must be low, as invariably found for dwarf galaxies. Therefore, SH2 is not an infalling dwarf galaxy, but has formed within a big gas cloud which had its origin in some galaxy interactions more than 1 billion years ago. SH2 is an example of how the still enigmatic globular cluster formation might have happened in the past," Richtler said.

The Concepcion team intend to continue observation of SH2 to uncover why it remained a molecular cloud for 1-2 billion years and only recently began to form stars. They also wish to examine its unusual ring-like shape.