Gases are detected in a 'super-Earth' atmosphere  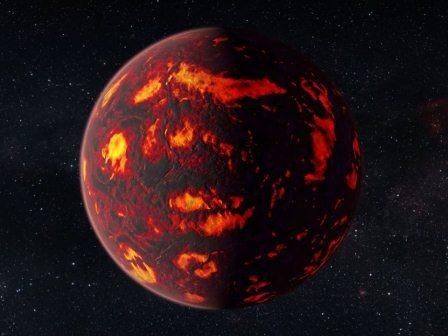 For the first time, astronomers have detected the atmospheric makeup of a 'super-Earth' – the most common type of planet in our galaxy.

Found in other solar systems, these exoplanets have a mass larger than Earth's, but are significantly smaller than the gas giants found in our Solar System, such as Jupiter and Saturn.

The super-Earth in question is called 55 Cancri e, which orbits the star 55 Cancri, located some 40 light-years away from Earth. 55 Cancri e qualifies as a super-Earth with a mass of about 8 Earth-masses, and thanks to a new study, we now know that its atmosphere contains hydrogen and helium, but no water vapor.

To analyze 55 Cancri e's atmosphere, a team of scientists led by the University College London (UCL) in the UK used data gathered with the NASA/ESA Hubble Space Telescope, and its Wide Field Camera 3 (WFC3), which measures ultraviolet and visible light (UVIS) and near infrared (NIR) light.

"This is a very exciting result because it's the first time that we have been able to find the spectral fingerprints that show the gases present in the atmosphere of a super-Earth," said one of the researchers, Angelos Tsiaras. "The observations of 55 Cancri e's atmosphere suggest that the planet has managed to cling on to a significant amount of hydrogen and helium from the nebula from which it originally formed."

"This result gives a first insight into the atmosphere of a super-Earth," said one of the team, Giovanna Tinetti. "We now have clues as to what the planet is currently like and how it might have formed and evolved, and this has important implications for 55 Cancri e and other super-Earths."

In addition to the distinction of being the first super-Earth with an atmosphere detected by humans, what makes 55 Cancri e so remarkable is its extreme proximity to its parent star. As implied by the artist's impression of the exoplanet above, this tight orbit means that a whole year on 55 Cancri e lasts for only 18 hours, and surface temperatures are thought to get as high as 2,000 degrees Celsius (3,632 degrees Fahrenheit).

"If the presence of hydrogen cyanide and other molecules is confirmed in a few years’ time by the next generation of infrared telescopes, it would support the theory that this planet is indeed carbon rich and a very exotic place," said researcher Jonathan Tennyson. "Although hydrogen cyanide, or prussic acid, is highly poisonous, so it is perhaps not a planet I would like to live on!" he added.