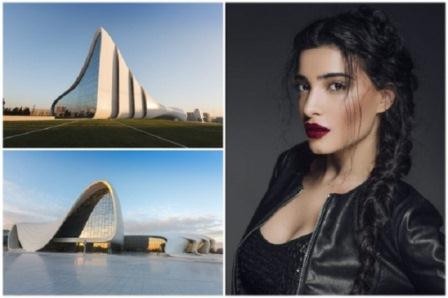 The 65-year-old, who was the first woman ever to be awarded the prestigious Pritzker Prize for Architecture, was known for her curvaceous buildings, which included the London Aquatics Centre and the Guangzhou Opera House.

As tributes roll in from around the world, Samra — Azerbaijan’s Eurovision 2016 singer — is paying tribute in her own way, by featuring Hadid’s stunning Heydar Aliyev Cultural Center in her Eurovision postcard.

Samra, who will film her postcard on April 9 and 10, chose the locations for her shoot several weeks ago, and SVT agreed that Hadid’s building should feature as the main location.

The “Miracle” singer has always admired the building, but Hadid’s passing added a poignancy to her existing interest.

“I learned about Zaha’s death this morning,” she said.

“It’s very sad. She was the most powerful and inspirational female architect in the world. I loved her.”

“I absolutely adore the Heydar Aliyev Cultural Center in my native Baku. I used to go there during sunsets when I could. I’m proud that we can honour her legacy in our Eurovision postcard.”