Azerbaijani students will be given education certificate 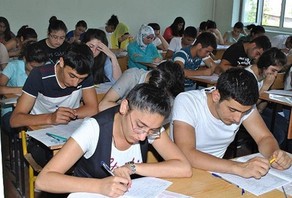 In 2016-2017 academic year, final assessment (attestation) of the students' knowledge on the new educational programs (curricula) for general secondary education level will be conducted under new rules.

The new rules were made by a working group consisting of employees of the Ministry of Education and SSAC, submitted for discussion at the last meeting of the State Exam Center (SEC) Board of Directors, also, opinions of the board members taken into account.

Thus, 9th grade final exam will be held by the State Exam Center in a centralized order in two stages, being of native language (Azerbaijani language for students of Azerbaijani department, Russian language for students of Russian department) and maths. In the first stage, the students will be presented 10 open, 10 closed questions under 2 texts to check comprehension and writing skills of native language (Azerbaijani or Russian language), 10 open questions of maths to check mathematical skills, a total of 30 test tasks.

Moreover, students will write a composition (essay) on a voluntary basis for the theme presented in the first stage. Mark for the composition (essay) will be considered to get honors general certificate of secondary education. In the second stage, the students will be presented 30 test tasks for each subject, a total of 60 closed questions in order to check knowledge and skills of other content standards.

Excluding Azerbaijani and Russian languages, students of foreign language general educational institutions will only take final exam of maths. They will be presented 10 open questions in the first stage and 30 closed in the second stage.

The first stage will be held in February and March 2017, the second in June.