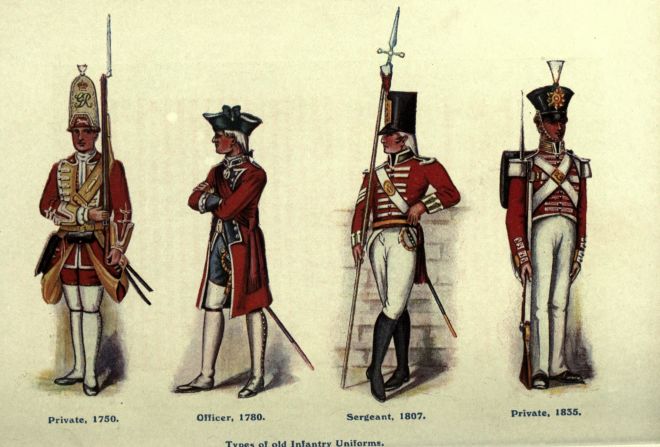 These days, when we think about dangerous military uniforms we mean shoddily made body armor or badly colored camouflage.

But far more disastrous uniforms have been used at many points in history, with deadly results for the soldiers wearing them.

The epitome of this was the stock, a high collar of stiff leather worn by the soldiers of many countries. It dug into the chin and neck, reducing the agility and situational awareness of soldiers.

This was not much of a problem on the mass battlefields of the old world, but in the forest skirmishing of North America, it became a hindrance, like everything about these uniforms. Men unable to adequately manoeuvre were easily killed by more agile enemies.

During the Seven Years War, tightened finances led the Prussians to wear uniforms made of the bare minimum of cloth. These shrank when they became damp, restricting movement and circulation, and could not always be buttoned up properly to protect men from wet weather.

The same tight finances meant that there were no cloaks to go over them, and many men froze to death.

The Hessian mercenaries employed by the British in Revolutionary America wore spectacular tall hats decorated with silver badges. These became caught on trees, hindering movement and being knocked off by low branches.

The British army has often made use of white bands. In the 18th and 19th centuries, such bands running across the famous red coats gave enemy snipers an easy way of aiming for the heart.

Even during the First World War, when they had generally shifted to more subtle uniforms, the British made a similar mistake. During the Gallipoli campaign, soldiers were given white armbands so that friends could be identified at night.

But as the British were often in exposed positions on the beaches, this also turned them into easily identifiable targets for the Turks.

When introduced in the seventeenth century, the red uniform for British soldiers was a great boon. It added a level of uniformity that had not previously existed and made for an intimidating sight.

As times changed, the red uniforms became less advantageous and more hazardous. Fighting the French, native and colonials in North America, the uniforms of the redcoats provided easy targets for snipers and made it almost impossible to sneak through the woods or hide in cover when ambushed.

Yet it was not until the late nineteenth century that the British realised just how hazardous the uniform was and changed it, just as other powers were doing the same.

6. Greatcoats in the Stores

British supplies in the Crimean War were so shambolic they became a national scandal. In November 1854, 12,000 desperately needed greatcoats reached Balaclava.

Three-quarters of them sat in stores through December and January while men died of exposure for want of warm clothes because rules said that soldiers should receive greatcoats no more than once every three years.

During the American Civil War, the Confederacy struggled to supply their troops with enough shoes and uniforms. At the Battle of Shiloh in 1862, 60% of the Confederate soldiers were wearing clothes they had captured off Union men, creating a high risk of friendly fire due to mistaken identity.

This situation was exacerbated by the fierce independence of some states – North Carolina produced twice the textile output of all the other rebel states put together, but insisted on using this to supply her own troops rather than the whole army.

In the First World War, head wounds from shrapnel were one of the biggest killers. The Germans dealt with this with Stahlhelms – helmets that protected most of the head and neck without obscuring the soldier’s view.

British helmets, not running as far down, left more of this vital area exposed, leading to deaths. Worse was in store for French forces, who initially were equipped not with steel helmets but with stylish soft hats.

By 1914, most countries in Europe had changed from their traditional brightly coloured uniforms to khakis, greys, and other neutral colours that would blend in. This saved soldiers from being easy targets for guns of growing accuracy and range.

The French resisted this change to the very last. It was only in the Balkans War of 1912-13 that Adolphe Méssimy, the Minister for War, acknowledged that their smart uniforms, including their bright red trousers, were getting French soldiers killed.

When he tried to change the uniforms, the popular press whipped up a storm of outrage at his undermining of good taste and national pride, and so the French marched into World War One in their red trousers. It was only after thousands of more deaths that they accepted change.

General Ion Emanoil Florescu, in charge of the Romanian army in the build-up to the First World War, loved a good display. And so he dressed the country’s armies up in elaborate uniforms rich with such flourishes as epaulettes and headdresses.

As the rest of Europe was shifting toward safely unobtrusive uniforms, he was turning his men into walking targets.

During the German invasion of Russia in 1941, some Italian contingents were exposed to frostbite and the other dangers of the Russian cold as they marched to war in cardboard shoes.

Meanwhile, luxury leather shoes were still on sale back in Italy.