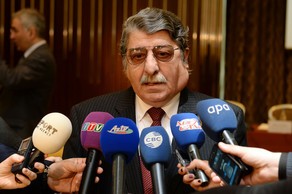 The problem of plagiarism in Azerbaijan especially more widespread in textbooks and in the field of music.

Chairman of Copyright Agency (CA) Kamran Imanov said at a roundtable entitled 'Plagiarism in the texts of scientific, educational and literary works and ways of its prevention' organized by the CA and Ministry of Education.

Kamran Imanov stated that fight against plagiarism is important and an affair of state. According to him, Azerbaijan has a problem of plagiarism, too: 'In particular, cases of plagiarism in Azerbaijan especially more widespread in textbooks and in the field of music. Recently, agency investigated 52 cases of plagiarism. 9 of these facts recorded last year'. The chairman also said Azerbaijan is in need of creation of national antiplagiarism system.