Ambassadors laid a wreath at Memorial of Military Glory 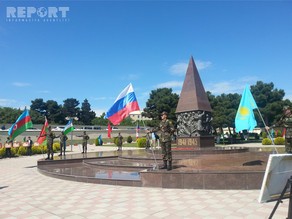 Heads of diplomatic missions of the CIS countries and military attaches have attended the event dedicated to Victory Day.

Diplomats of CIS countries laid a wreath at the Memorial of Military Glory in Baku.

Representatives of Executive Power of Narimanov district Baku city, veterans and their relatives attended the event.

Chief of Executive Power of Narimanov district Abdin Farzaliyev congratulated all veterans on Victory Day and noted Azerbaijan's role in the victory during the Great Patriotic War. He called to commemorate those, who died in the war as well as sacrificing their lives for independence territorial integrity of the homeland.

Addressing on behalf of the heads of diplomatic missions of the CIS countries, Russian Ambassador to Azerbaijan Vladimir Dorokhin said that 1941-1945 victory was achieved due to solidarity. He also stressed Azerbaijan's contribution to the victory, participation of Azerbaijanis on the frontline, importance of Azerbaijani oil, techniques and missiles, produced in this country. According to him, about 1,5 million people have been treated in Azerbaijan's hospitals during that period.