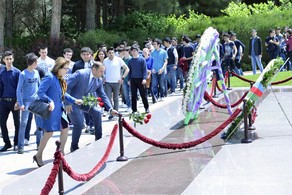 It was told in the press service of Baku Higher Oil School, BHOS management, professors and students visited the Alley of Honor to pay tribute to the National Leader. On May 10 in all lecturing halls of BHOS the National Leader was commemorated with a silence minute.

In addition, Haydar Aliyev’s honorary life, his irreplaceable merits in building Azerbaijani statehood, his farsighted and wise policy and the place he forever secured in people’s hearts as the National Leader was recalled.

The seminar dedicated to the 93rd anniversary of the National Leader Haydar Aliyev was organized at the National Flag Museum.

Alimdar Shahverdiyev, Associate professor of BHOS English language and HD center conducted the workshop on ‘Haydar Aliyev’s political portrait’ for BHOS students. He mainly focused on political activity of the National Leader Haydar Aliyev, the state policy he followed and his merits in this connection.

The workshop proceeded by questions and answers session.