Hasanov attends the opening of a new military hospital - Video 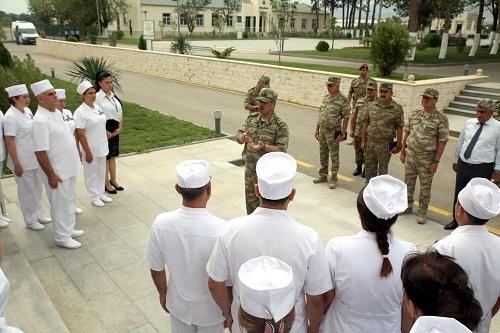 Due to the attention and care of the President of the Republic of Azerbaijan, the Supreme Commander-in-Chief of the Armed Forces, confident reforms are being carried out in the field of military capability development, improving the service, social and living conditions of military personnel, protecting the health of servicemen, strengthening the logistic support of the army, and creating military infrastructure that meets modern standards.

On the instructions of the country's leadership, the Minister of Defense, Colonel General Zakir Hasanov, and the leadership of the ministry attended the opening of a new military hospital in the frontline zone to report on the work done in this area to the Supreme Commander-in-Chief of the Armed Forces.

In the beginning, the leadership of the Ministry of Defense laid flowers at the monument to national leader Heydar Aliyev in the territory of the hospital, paid tribute to his memory.

It was reported that all conditions for the treatment and provision of high-level medical services to the military personnel are created in the wards equipped with equipment which is the latest achievement of medicine manufactured in Germany, the USA, Japan, and other developed countries. The hospital is equipped with a biological treatment device, UPS system for uninterrupted power supply of surgical operations, a reserve generator, water, gas, heating, and other communication systems. A group of two reanimobiles was created and a helipad for evacuation was built on the territory to provide emergency medical care.

The Minister of Defense has got acquainted with the conditions created in the new military hospital, met with the medical staff and congratulated on the holy holiday of Gurban Bayram and gave relevant instructions in connection with the organization of the medical service.

In the end, a ceremony of sacrifice was held and a photo was taken.