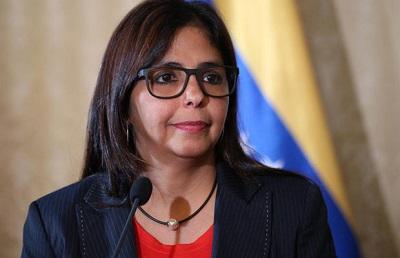 Venezuela’s Executive Vice President Delcy Rodriguez is currently on a working visit to Russia, a spokesman for the Venezuelan embassy in Moscow told TASS on Monday.

"She is currently in Moscow," the spokesman said, adding that the vice president plans to have talks with Russian Foreign Minister Sergey Lavrov on August 21.

Rodriguez visited Moscow in early March. At that time, she discussed with Russian Foreign Minister Sergey Lavrov ways of further coordination on the global stage, the situation in Venezuela and joint projects in the energy sector, industry, agriculture and the pharmaceutical industry. In particular, Rodriguez announced Caracas’ plans to move the European office of the national oil company PDVSA, or Petroleos de Venezuela S.A., from Lisbon to the Russian capital..