While battles continue in the frontline... 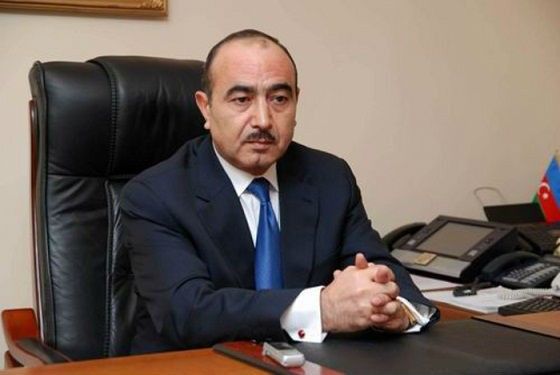 Axar.az reports that Azerbaijani President’s Assistant for Public and Political Affairs Ali Hasanov posted in the status of his Facebook page.

"On 15 June 1993, Heydar Aliyev arrived in Baku at the invitation of the people in order to save Azerbaijan from the hopeless situation it was in and was elected chairman of the Supreme Council. However, all power-wielding agencies in the country did not subordinate to the chairman of the parliament but formally to the legitimate president and actually to the prime minister. There was neither an army nor any other power-wielding agency that would be subordinated to Heydar Aliyev as chairman of the parliament. Parliament members supporting the legitimate president who had left the capital, as well as the officials loyal to him, created legal and non-legal obstacles to the exercise of powers by Heydar Aliyev even as chairman of parliament" - he mentioned.

The status says: “The PFPA-Musavat government plunged the country into a deplorable state, and this was particularly acute in the army. The army did not have material and technical supplies, a military arsenal. Neither was their national unity in the rear to maintain the fighting spirit of the army. While fighting was underway at the forefront, a war for senior posts was being fought in the rear. An overt armed struggle was taking place between political groups. Various formations within the armed forces were subordinated to individual political and interest groups. To snatch a good piece of the pie, political groups fighting for posts in the capital pulled these armed formations from the front line to Baku and used them as an instrument of pressure in the political struggle and the distribution of posts.

Our people still remember armed detachments of Surat Huseynov, Isgandar Hamidov, Rahim Gaziyev, Rovshan Javadov, and others wandering in the streets of Baku during the fighting at the front line. They were cracking down on people, turned the capital into a military training ground to snatch a larger piece of the pie in the distribution of government posts. While the armed forces were fighting for posts in Baku, the front line was left without defense. As a result, Armenian aggressors managed to occupy Nagorno-Karabakh together with seven districts adjacent to it.

Let those seeking to falsify history answer the question: under such circumstances, with what army, power-wielding agencies, and authorities could Heydar Aliyev has prevented the loss of territories?

Heydar Aliyev as chairman of the parliament who had no access to any power-wielding agencies and therefore unable to prevent occupation, was able to save Azerbaijan from the threat of ethnic and regional dismemberment, civil war and chaos.

Our people have not forgotten what Heydar Aliyev did to save Azerbaijan within just six months after returning to Baku:

2. Heydar Aliyev united all citizens of the country around the idea of a single state, Azerbaijanism, by mobilizing them against the trends of regional and ethnic separatism, which was at best designed for the federalization of Azerbaijan but was actually meant to erase it from the political map. The intelligentsia, ordinary citizens of the southern, northeastern and northwestern regions of the country responded to the calls of Heydar Aliyev, extinguished the centers of separatism, and Azerbaijan escaped from the threat of dismemberment;

3. In a short period of time, Heydar Aliyev managed to build from non-existent armed forces used by "field commanders" in their internal "showdowns" and by the Minister of Defense to capture other ministries and the Presidential Administration a real national army staffed with patriotic soldiers and officers. This army won its first serious successes in Horadiz and Jabrayil and proved to be capable of thwarting, as has been disclosed by some officials, the plans drafted in other capitals on the division of Azerbaijan between different countries. The fact that our army turned into a real force in a short time compelled Armenia to conclude a ceasefire agreement;

4. Heydar Aliyev stopped the chaos, lawlessness, the police racketeering system, robberies and the power of mafia bosses inside Azerbaijan. The rule of law was established in the country. And now let me repeat the expressions you don’t like: people began to go out without fear of being abducted and injured;

5. Heydar Aliyev saved Azerbaijan from an unsightly foreign policy that turned your own government and our young state as a whole into an enemy of the whole world. Traveling the world with a map of Azerbaijan, he talked about our realities and problems like a teacher, managed to convince the world community that challenging the world with racial and ethnic bias, myths about the “destruction of Iran,” “the dismemberment of Russia,” “Turkic banners in China” were not a foreign policy course. He pursued a complementary foreign policy which did not have problems with any neighboring state with the exception of Armenia.

Who is to blame for the loss of lands – those whose interior minister threatened the world with a nuclear war, those whose defense minister challenged the president and speaker, those whose field commander turned troops towards the capital to participate in a bickering for posts, or Heydar Aliyev who saved Azerbaijan from this disgrace, abnormal situation, political and physical destruction?

Ali Karimli, history has shown the likes of you your true place precisely for your desire to falsify it. Your political biography has long been over. You are now of interest only as a blogger...”.