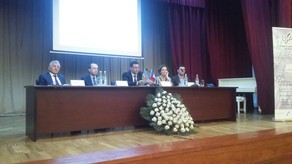 Azerbaijan State Oil and Industry University (ASOIU) has played host to the meeting of applicants and 11th grade students with participation of French Ambassador to Azerbaijan Aurelia Bouchez.

In turn, French Ambassador to Azerbaijan Aurelia Bouchez stated that the University of Azerbaijan-France (UFAZ) under the ASOIU will be launched in September this year. The ambassador expressed her gratitude to the rector of the university and Ministry of Education of Azerbaijan for assistance in establishment of the UFAZ. She said that the agreement on the establishment of the UFAZ has been reached between Azerbaijani President Ilham Aliyev and French President Francois Hollande in 2015.

According to the ambassador, UFAZ graduates will receive two diplomas: 'Fields as geophysics, petroleum chemistry, engineering and information technology will be studied in the new university. UFAZ participating universities are prestigious educational institutions. They are University of Strasbourg and University of Rennes. Teaching will be conducted in English and then French. This will allow graduates to find work easily in foreign companies'.

A.Bouchez added that in the future, the university could obtain regional status and Georgian, Russian and Iranian students could get an education there.

Then ASOIU and UFAZ was presented. Applicants and 11th grade students asked questions of their interest.