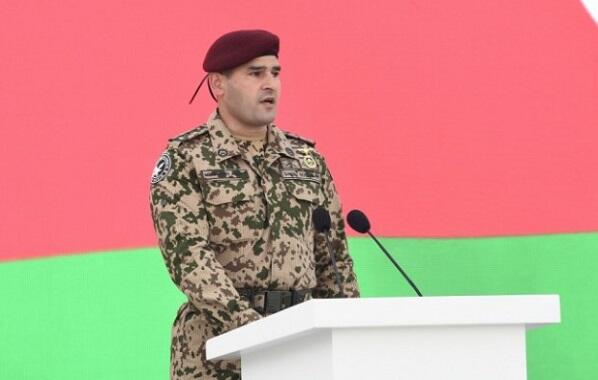 I am honored and proud to participate in the Victory in the forty-four-day Patriotic War. We also had the opportunity to fight for every inch of our homeland, and in the end, a glorious victory was achieved, engraved in the history of Azerbaijan as a glorious chronicle.

Axar.az reports that this opinion was expressed by President Ilham Aliyev at a meeting with servicemen, Captain Nurlan Mammadov, a special forces soldier of the Interior Ministry's Internal Troops, who was awarded the Karabakh Order.

Nurlan Mammadov said that we won the war at the expense of the lives of our martyrs and the bravery of our servicemen. Each time we were thrown into battle, we were strengthened by one goal, one goal - to strike a crushing blow to the enemy in a short time and free our lands from being trampled. Our comrades-in-arms, who fought heroically for the Motherland and defended the Motherland at the cost of life and health, are always in our hearts and memories. They will never be forgotten!

"Today, a group of our servicemen who are carrying out a great liberation mission are being awarded state orders and medals. The unit I served in took an active part in the battles in the direction of Fizuli, Shusha, Kalbajar and Khojavend and the liberation of these regions. "My participation in those battles was appreciated by our state and I was awarded the Karabakh Order," the captain said.

Expressing deep gratitude to Supreme Commander-in-Chief Ilham Aliyev for this high attention, Nurlan Mammadov said: “While fighting hard in the war, liberating every inch of the homeland, you felt the victorious command of the Supreme Commander-in-Chief, increasing moral support. You can be sure that the Internal Troops of the Ministry of Internal Affairs will continue to stand shoulder to shoulder with the heroic Azerbaijani Army, demonstrating high fighting ability and strong will for the freedom and sovereignty of the Motherland, the security of our people. We will not spare our lives on this road."