I’m trying all settlements to be in necessary level" 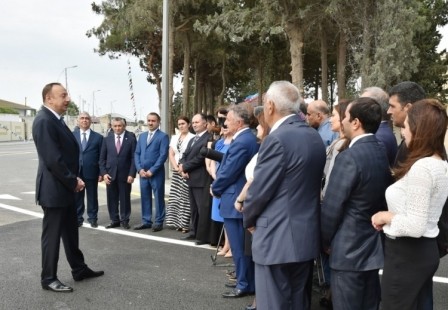 He noted that the Nardaran inhabitants earlier invited him to the settlement: “I did not want to show up empty-handed and decided to visit when the road repair will be completed. Today, these roads are opening. I’m so glad that both Mashtaga-Bilgah road and internal roads of Nardaran have been reconstructed. Roads have been broadened, necessary compensation have been paid for evacuated homes. I’m trying all settlements in Azerbaijan to be in a necessary level. Settlements of Baku are quickly being developed. Power, gas and water supply in the settlements are improved. Infrastructure projects are implemented in the settlements. Most of these projects have been implemented”.


President Ilham Aliyev said that the road infrastructure must accord to sewerage system in order not to drill roads again: “Baku is one of beautiful cities in the world. Baku suburbs also must be at this level. Therefore, the issues on conditions, jobs of people and reconstruction works in the settlements must be and are solved. I’m sure all unsolved issues will be solved in the years coming”.