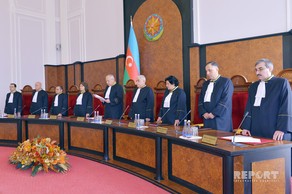 Regular open judicial session of Plenum of the Constitutional Court of Azerbaijan chaired by Farhad Abdullayev.

In connection with the complaint of Z. Huseynov, the meeting has considered the constitutional case concerning verification of conformity of the decision of Administrative Board of the Supreme Economic Court of the Azerbaijan Republic dated December 15, 2015 with the Constitution and laws of the country.

Plenum of the Constitutional Court heard the report of judge R. Gvaladze on the case, the applicant's representative and respondent authority, then investigating the case, has made a decision.

The document states that the decision of the Administrative Board of the Supreme Economic Court of the Azerbaijan Republic dated December 15, 2015 on the case of liquidation of the registration card of Z.

Huseynov at the Baku City Territorial Management Service State Real Estate Register Service under the State Committee for Property Affairs will be considered lost its force due to the mismatch to Article 60 of the I Chapter of the Constitution and Articles. 91 and 96 of the Code of Administrative Procedure.

According to the decision, the case will be reviewed at a set time and in the prescribed manner, in accordance with the administrative and civil procedural legislation of the Republic of Azerbaijan.

The decision shall enter into force upon the signature, it shall be deemed as a final and can not be canceled, changed or officially interpreted by any person or entity.