Neymar has scored his 100's goal for Barcelona - Video 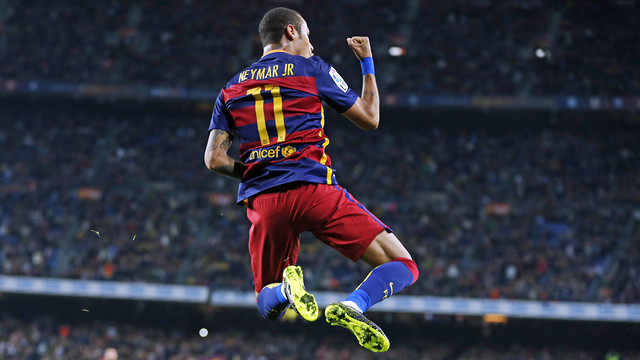 Neymar has joined the likes of Lionel Messi, Luis Suarez, Samuel Eto'o and Rivaldo in Barcelona's 100 club after scoring against Granada.

The forward completed a century of Barca goals in his 177th match for the club during Sunday's game at Los Carmenes, netting in stoppage time to put the seal on a 4-1 win.

Neymar is the third Brazilian player to reach the milestone with the Catalan giants, following in the footsteps of Rivaldo and Evaristo.

He joins stars of Barca's past and present on the prestigious list of players to have reached the milestone, one which is topped by team-mate Messi, who is closing in on the 500-mark.

The other member of Barca's 'MSN' strikeforce, Suarez, also made it to 100 in January.

Neymar is racking up the milestones in his fourth Camp Nou season after passing Barca icon and compatriot Ronaldinho's mark of 94 goals for the club last month.

After signing from Santos in 2013, he scored his first goal in that year's Supercopa de Espana against Atletico Madrid, which was also his first of nine trophies.

His best goalscoring season came in 2014-15, when he netted 39 times in helping Barca to the treble under Luis Enrique.