C.Ronaldo and S.Ramos at war as dressing room implodes 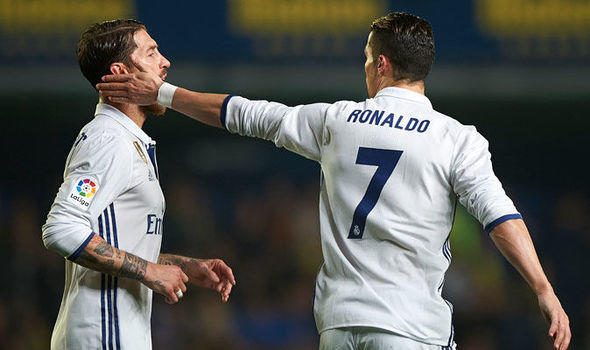 The pair have apparently divided the dressing room with teammates taking sides, forcibly making it a hostile and awkward environment.

Results have been far from pleasing on the pitch as Zinedine Zidane’s side trail league-leaders Barcelona by eight points.

But behind the scenes are where the problems appear to be at their deepest.

According to Marca, since the summer turn-around of players Ramos has seen a shift in power in his favor.

Ronaldo’s fellow Portuguese contingent Pepe and Fabio Coentrao have both left the club, while personal friend James Rodriguez is on loan at Bayern Munich.

Ramos is thought to have the respect of the younger players, while Nacho, Dani Carvajal, Marco Asensio, Isco and Dani Ceballos have also sided with the center-back, it is reported.

Ronaldo has openly criticised Madrid’s summer recruitment, but Ramos counteracted and defended it.

The winger is also thought to be upset at Ramos’ comments trying to lure Brazilian star Neymar to the Bernabeu, which would provide genuine competition for his place.

After Spain’s recent draw with Russia over the international break, Ramos was asked about Ronaldo’s future in the Spanish capital.

"Cristiano is leaving? Ask him, I don't know about these things," he replied tentatively.

Madrid faces rivals Atletico this weekend and it is yet to be seen if the two will come to blows once more as their relationship continues to disintegrate.