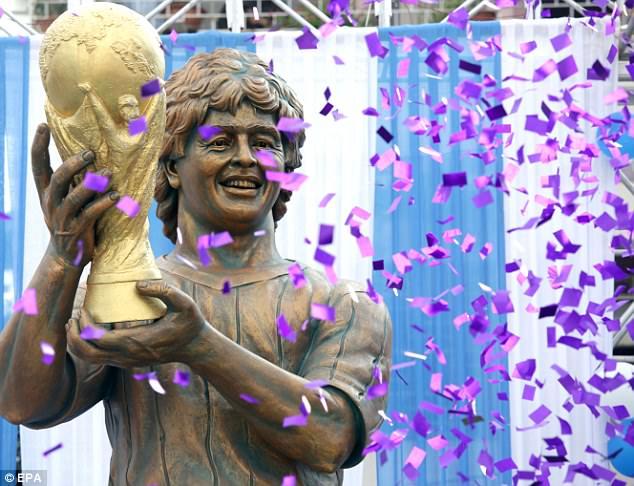 Diego Maradona has travelled to India unveil a new 12-foot high statue in his honour.

The monument depicts the moment the Argentinean legend lifted the 1986 World Cup and has already drawn some unfavourable reviews from fans on social media.

A bust of Cristiano Ronaldo drew worldwide ridicule for its dubious likeness to the Portuguese forward last year and a number of people have called Maradona's statue 'worse than Ronaldo's'.
The 12-foot high statue was unveiled in Kolkata during a charity event in aid of people battling cancer.

The 57-year-old was visiting India for the second time since he first visited the country back in 2008.

"I don't think I'm the god of football. I just consider myself as a simple football player," said Maradona.

"It's amazing to have my statue here. I am glad to be in Kolkata for the second time. Thank you very much for the love."

The 57-year-old, who was in accompanied in Kolkata by his girlfriend Rocio Oliva handed cheques worth 10,000 rupees (£116) to 11 cancer patients.

Maradona is due to take on Indian cricket legend Sourav Ganguly in a charity football match titled 'Diego vs Dada' in Barasat later this month.