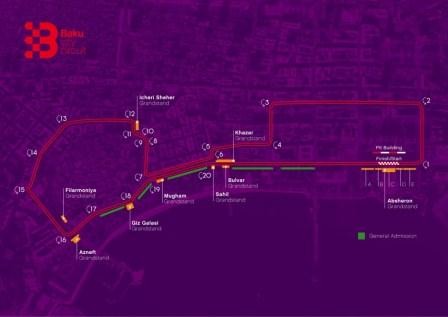 In the summer of this year Azerbaijan will host "Formula-1" the European Grand Prix.

Azerbaijani Youth and Sports Minister Azad Rahimov informed the preparations for "Formula-1" the European Grand Prix: "We have been working with Herman Tilke, the architect of “Baku City Circuit” and his team since 2013 for the design of trek.

The project is being implemented by the company of "Tilke Engineering". The main purpose is to build a unique trek what teams and fans of F1 will enjoy. The progress of works shows that this goal will be achieved. "

According to the organizers of the race, the track that will be used for European Grand Prix as well as the entire necessary infrastructure will be established in accordance with the highest international standards.

Chief of Marketing and Communications Department at “Baku City Circuit” Operation Company and the national press secretary of European Grand Prix for "Formula-1", Nigar Arpadarai said inviting F1 fans: "There are 4 months to hear sound of the world's most spectacular racing cars on the streets of the city. “Baku City Circuit promises surprises for "Formula-1” fans. So, do not miss this opportunity, try to get tickets soon! ".

Tickets are offered at different prices to audience. Various ticket packages are available as well as for Absheron Tribune. The audience sitting in the stands will be able to watch more closely start / finish line. In addition, tickets for standing areas are offered. A total of 30 thousand spectators can watch the races from the nearest track.

The information about tickets and other data relating to the race can be obtained from the website “www.bakucitycircuit.com.”

Various entertainment events, organizing live concerts are also planned along the seaside for the fans of F1.