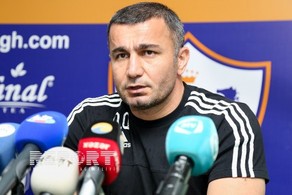 Head coach of 'Karabakh' FC Gurban Gurbanov is a new record-holder in the history of Azerbaijani championship.

According to the official website of the Professional Football League, 44-year-old specialist is a single coach getting 3-season consecutive championship.

The reason is that 'Karabakh' was a champion at the Premier League 2015/2016 season and won gold medals at the 3rd time consecutively. No coach has broken this record. 'Neftchi' consecutively won 3 championships 1 time coached by Arif Asadov, 2 times by Boyukagha Hajiyev. Earlier, Kazbek Tuayev, Mehman Allahverdiyev, Aghasalim Mirjavadov, Buyukagha Hajiyev and Gurbanov could won championship 2 times consecutively. So, Gurbanov broke a new record.

In general, number of his gold medals in the post of head coach is equal to number of medals gained by Hajiyevand Allahverdiyev - each three times. 'Trinity' lags behind Aghasalim Mirjavadov (5) Kazbek Tuayev (4). Other 5 head coaches - Ahmad Alasgarov, Gyoko Hajiyevski, Kakhaber Tskhadadze, Valentin Khodukin and Arif Asadov each gained one medal.