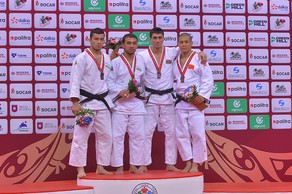 It is the second medal won by Rustam Orujov in 15 days. On April 22, Azerbaijani judoka became an European champion.