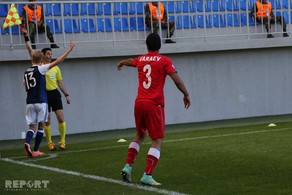 Azerbaijan's U-17 team has held last match at the European Championship group stage.

The rival was Scotland.

No goal recorded in the first part of the match, organized at Bakcell Arena. In the second part, the team, coached by Tabriz Hasanov, increased pressure and reached its goal. In 79th minute, Farid Nabiyev scored a goal - 1:0.

Despite the victory, Azerbaijani team failed to reach the 1/4 finals, as Portugal and Belgium played out a goalless draw the parallel match of the group. At the end of the fight in A group, Portugal team ranked 1st with 7 points, Belgium 2nd with 5 points, Azerbaijan 3rd with 4 points.

According to the results of three matches, Portugal and Belgium teams qualified for the next stage.