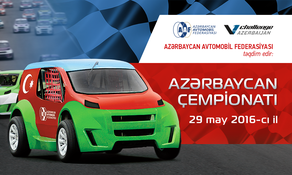 Baku will for the first time host the "V1 Challenge Azerbaijan" contest, organized by the Azerbaijan Automobile Federation.

The race will be held around Boyukshor park near the Olympic Stadium in the open air.

12 local pilots will take part in the championship.

At first, they will compete in rank then they will be divided into 3 groups and continue struggle. Top 3 winners will be awarded.

Notably, on October 11, 2014, the Azerbaijani capital of Baku hosted for the first time ever the presentation show of the V1 Challenge Azerbaijan competition, organized by the Azerbaijan Automobile Federation.

French racer Anthoine Hubert came in first in the competition, which involved 14 drivers from 12 countries.

The V1 Challenge Azerbaijan is a project aimed at developing the motor sport in Azerbaijan.

18 000 spectators have watched the competition.