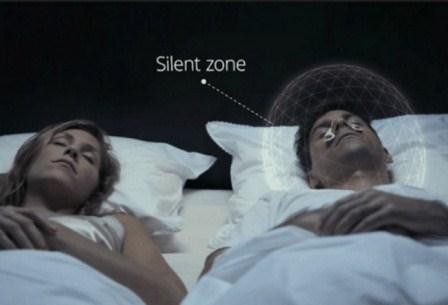 There's a bunch of different reasons why people snore. From muscle problems to mucus obstruction, the list is frustratingly vast, and it seems that the only definite fact about snoring is that everyone finds it utterly - almost to the point of violence - annoying. The good news is that those days could soon come to an end, thanks to a new smart patch that creates a 'silent zone' around noisy sleepers by emitting counter sound waves.

According to Elizabeth Goldbaum for LiveScience, about 45 percent of healthy adults snore from time to time, and 25 percent are full-time snorers. So with nearly half the population snoring and the other half pretty upset about it, it's no surprise that companies have been trying to find a snore-snuffer for years.

Most of the time, these come in the form of nasal strips or sprays that attempt to open a person's airways to stop the noise, but they obviously don't work great for everyone, considering that snoring is still such a widespread problem.

But now, a new gadget is about to hit the scene with a more advanced approach. Developed by a US-based tech startup, and dubbed the 'Silent Partner', the new device will employ active noise-cancellation - the same technology found in super-fancy headphones.

This means that it will detect the sound waves created by a snore and send out an opposite sound wave that effectively cancels it out, creating a bubble of silence around the offending person.

In appearance, the Silent Partner resembles a slightly bulkier nasal strip, and is specifically designed to pick up common snore sounds from a source roughly 20 centimeters away, which means that it won't silence someone trying to talk to you, for example. Basically, it's a tiny computer that can take in sound, amplify it, calculate a counter sound, and play it in real-time.

The team behind the device notes that it's been designed for people who snore, but who don't have any sort of sleep disorders such as sleep apnea, which require medical intervention and treatment because they can seriously impact your health.

In order to create the Silent Partner, the team took to the crowdfunding site, Indiegogo, where they set up a campaign to raise US$40,000. At the time of this article, the project has raised 655 percent of this goal, putting the total amount raised at $474,209. The startup has yet to announce a release date.

Whether or not the Silent Partner will become the snore-killer it claims to be will have to remain a mystery until it's widely available.