Zakir Hasanov watched the shootings of our units - Video 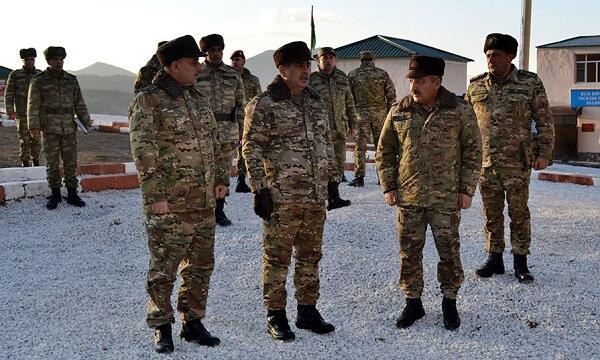 The Minister of Defense Colonel General Zakir Hasanov and the leadership of the Ministry attended the opening of a training centre recently built in the liberated territories.

Axar.az reports that the Minister of Defense was reported that all the necessary infrastructure was created in the centre for the deployment and activities of military personnel and combat training vehicles to be involved in the exercises.

The specially modelled training centre was built taking into account the real combat conditions. It is planned to conduct exercises on the management of various types of military equipment in difficult terrain and severe weather conditions, as well as to improve practical skills in firing from military equipment.

In addition, the training centre has created the necessary conditions for the conducting of shooting exercises from mortars, grenade launchers, small arms, and other weapons, teaching, and practical training on combat missions.
It was noted that the training exercises will be conducted by qualified instructors in order to further increase the combat readiness of servicemen and increase their professionalism.

After inspecting the firing range, the Defense Minister watched the demonstrational combat firing.
Colonel-General Z. Hasanov gave relevant instructions on the study of modern training methods with the application of experience gained during the Patriotic War, their application in combat training, and their accomplishment in accordance with the existing conditions.