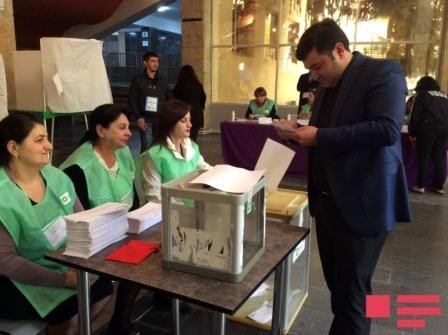 Georgia started elections for the parliament on October 8.

The voting process started at 08:00am at 3703 polling stations in all regions of the country.


Kvirikashvili congratulated the people on the occasion of the important day: I surely support the future of the country and its stable democratic development for the sake of prosperous living of our citizens. I also support the soonest economic development of Georgia, healthy youth, high education. I am happy and hope that this way will lead us to a pleasant future.


65-year old Huseyn Minasazov cast the first vote at polling station No.3 in compact settlement of Azerbaijanis in Marneuli. He said he voted for peace, prosperity and development of the country. Ruslan Hajiyev nominated by Georgian Dream - Democratic Georgia Party cast a vote at polling station No.14 in Azizkend village of Marneuli district. Representatives of the UK embassy in Georgia and Democratic Unity Institute are observing the elections.


19 political parties and 6 blocs are registered for the parliamentary elections in Georgia. In Georgia’s mixed electoral system 77 seats in 150-member Parliament are allocated proportionally under the party-list contest among the parties and election blocs. Rest of the 73 MPs are elected in 73 single-member districts, known as “majoritarian” mandates.