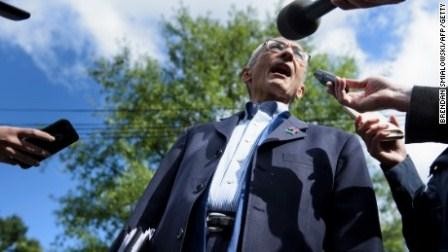 Dozens of religious leaders who signed the statement expressed their "outrage at the demeaning and troubling rhetoric used by those within Secretary Clinton's campaign."

The statement is referring to a 2011 email between campaign chairman John Podesta, whose email was hacked, and communications director Jennifer Palmieri and John Halpin, a senior fellow at the liberal think tank Center for American Progress.

In the email, Halpin wrote that 21st Century Fox Chairman Rupert Murdoch and NewsCorp Chairman Robert Thomson, who are both Catholic, are attracted to the faith because of "systemic thought and severely backward gender relations."

Palmieri responded: "I imagine they think it is the most socially acceptable, politically conservative religion -- their rich friends wouldn't understand if they became evangelical."

The religious leaders said in the statement, "Podesta's refusal to raise any objection makes him equally party to this bigotry. It is inexcusable. It is shameful. It is un-American."

Palmieri -- who is Catholic, according to campaign spokesman Brian Fallon -- told reporters Wednesday that she "didn't recognize (the email) but moreover ... we are not going to fact check each of the emails that were stolen, hacked by Russian lead efforts in an effort to hurt our campaign."

The statement ends with the leaders asking that Clinton immediately apologize for the comments of her aides.
"The WikiLeaks emails reveal a contempt for all traditional Christians, and we are -- Catholic and Evangelical -- united in our outrage and united in our call for Mrs. Clinton to immediately apologize for the Christophobic behavior of her associates," the statement said.