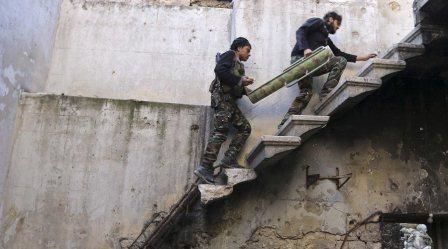 The incident reportedly took place west of Aleppo's airport in Karam al-Tarrab on Sunday. It’s not clear which kind of poisonous agent was used by the militants.

The number of soldiers injured in the attack may be as high as 44. "We don’t know exactly how many of them had died or how many are merely sick," he added.

Only the Syrian military is in the affected area, and no civilians.

If confirmed the attack will become the third instance of terrorists using chemical weapons in Aleppo in the space of just two weeks.

Previously, gas was used on October 30, when one person was killed and 40 injured. A second incident took place on November 3.

Following the discovery, Russia’s Defense Ministry addressed the UN’s Organization for the Prohibition of Chemical Weapons, asking it to send a mission to Aleppo.Both Russian and Syrian authorities repeatedly warned that militants from some hardline groups might use chemical weapons against civilians and government forces in the city.

The West have pointed the finger at Damascus and Islamic State (IS, formerly ISIS/ISIL) for using chemical weapons, but not militants in Aleppo, who are labeled the ‘moderate opposition’ by the US and its allies.

Russian and Syrian aviation have halted its air strikes in Aleppo, which remains split between the Syrian government forces and the terrorists, on October 18, and have been regularly organizing 10-hour "humanitarian pauses" in the city.