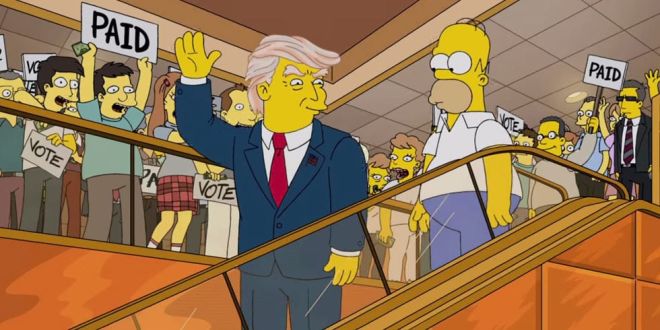 The man who predicted that Donald Trump would become president in an off the cuff joke on The Simpsons has revealed where his prophetic joke came from.

16 years ago Simpsons writer Dan Greaney and a team of writers wrote the episode ‘Bart to the Future’, an episode which saw Lisa Simpson elected to the office of president after President Trump ruined the world’s economy.

Now that jokes become a reality – minus the destruction of the economy thankfully – and Dan’s taken the time to explain how they saw into the future, spoilers they didn’t.

It was a warning to America. That just seemed like the logical last stop before hitting bottom. It was consistent with the vision of America going insane.

What we needed was for Lisa to have problems beyond her fixing, that everything went as bad as it possibly could, and that’s why we had Trump be president before her.

While it’s obvious that Trump isn’t held in high regard by The Simpsons writers Dan did also explain that the Trump they were writing about was more incompetent than cackling evil and had none of the ‘darkness’ of real life Trump.

He added that there’s nothing in the episode about walls, rounding up Mexicans or Islamophobia. He joked that Trump seems the type of guy who’d build giant monuments to himself not walls around counties.

Trump’s been a frequent target of jokes on The Simpsons most notably in 2015’s ‘Trumptastic Voyage’ which saw Homer exploring Donald Trump’s magical hair.

Only last month The Simpsons’ creator Matt Groening explained that back in 2000 Trump was the most absurd placeholder joke name the writers could think of, something Groening says still stands.

Turns out becoming president doesn’t get you any respect with The Simpsons writers.