Experts to collect evidence of chemical weapons in Aleppo 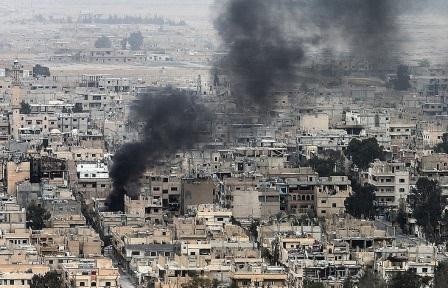 According to the Russian Defense Ministry, militants repeatedly used chemical weapons in their attempts to break through the external defense circle of the Syrian army around Aleppo.

A group of military experts from the Scientific center of Troops of Radiological, Chemical and Biological Defense of the Russian Armed Forces have arrived in Aleppo to collect samples in the areas where militants used chemical weapons, Russian Defense Ministry’s official spokesman Igor Konashenkov said on Thursday.

"Experts from the Russian Defense Ministry are equipped will all necessary technical means to perform express analysis, collection and delivery of samples to the Russian Federation. Toxic chemicals and products of their disintegration found in Aleppo will be analyzed at the laboratory of chemical-analytical control at the Scientific Center of the Troops of Radiological, Chemical and Biological Defense that is accredited by the Organization for the Prohibition of Chemical Weapons (OPCW)," Konashenkov said.

According to the Russian Defense Ministry, militants repeatedly used chemical weapons in their attempts to break through the external defense circle of the Syrian army around Aleppo at any cost. On October 30, two Syrian servicemen died and 37 civilians were injured in the chemical weapons attack in Aleppo’s south-west.
Konashenkov said Russian Aerospace Defense Forces and Syrian Air Force have been observing moratorium on any actions in Aleppo for the last 18 days. At the same time, the US-led coalition’s aircraft, including US B-52H strategic bombers, performed 23 sorties yesterday and delivered 14 airstrikes at settlements near the Iraqi city of Mosul.