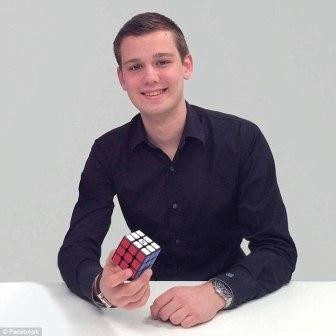 A Dutch 'speedcuber' solved a Rubik's Cube in an incredible video.

Axar.az reports citing to DailyMail that, Mats Valk pulled off the feat in a mere 4.74 seconds -- and nabbed the world record.

He examined the cube, then placed it on the table and pressed his hands on the timer.

The 20-year-old whizzed through the 3 x 3 puzzle cube, before he dropped the completed cube on the table and hit the timer.

Applause and cheering could be heard after he solved the Rubik's Cube.

Valk was later seen standing and smiling, with a fist raised, in the video.

Valk solved the cube at the Jawa Timur Open 2016 in Indonesia.

The World Cube Association said on its website Sunday that 'Mats Valk won the Jawa Timur Open 2016 with an average of 8.53 seconds.'

The event was held in Blitar over the weekend.