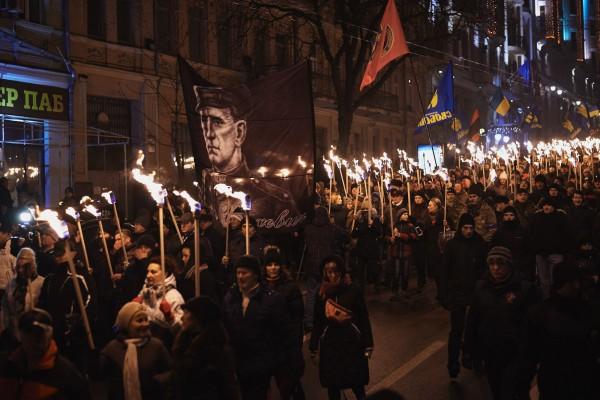 Ukrainian nationalists in Kiev chanted “Jews out” in German at a New Year’s Day march celebrating the birthday of a Nazi collaborator whose troops killed thousands of Jews.

Axar.az reports that, thousands attended the event in the center of the Ukrainian capital celebrating Stepan Bandera, a leader of Ukraine’s nationalist movement in the 1930s and ’40s. They held up his portrait while an unidentified person shouted the anti-Semitic slogan on a loudspeaker, prompting many participants to repeat it, a video published by the Federal News Agency showed.

Bandera’s movement included an insurgent army which fought alongside Nazi soldiers during part of World War II. Supporters of Bandera claim they sided with the Nazis against the Soviet army, believing that Adolf Hitler would grant Ukraine independence. Bandera was assassinated in 1959 by Russia’s KGB in West Germany.

Oleksandr Feldman, a Ukrainian Jewish lawmaker and president of the Ukrainian Jewish Committee, called on authorities to investigate the march and prosecute those responsible for the hateful slogans.

“I still can’t get over hearing it at the rally in honor of Stepan Bandera’s birthday,” Feldman wrote in an emotional post on Facebook Tuesday. “I admit, I’m choking up with tears. I love Ukraine, love the Ukrainians.”

Adding that the chants came from a “gang of a few idiots who don’t represent anyone,” he nonetheless wrote: “I can’t ignore it when I, a man who worked so much for my country and city, created the hundreds and thousands of jobs, am being screamed at by some bastards to leave my homeland.”