US transfers 10 Guantánamo prisoners to Oman 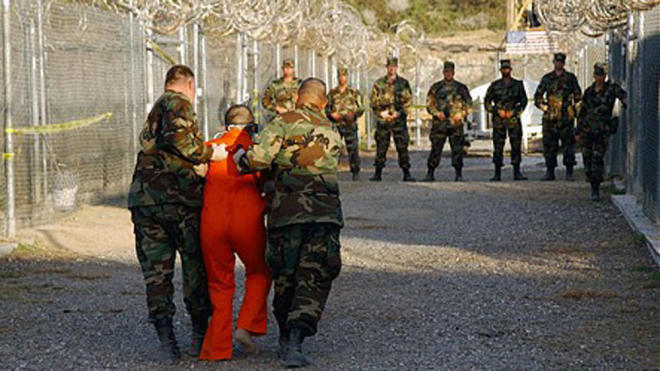 Oman has received 10 inmates from the US military prison at Guantánamo Bay, in a move to reduce their numbers days before the US president, Barack Obama, leaves office.

A statement from the sultanate’s foreign ministry did not disclose the nationality of the prisoners who would reside in the Gulf country on a temporary basis.

“At the request of Sultan Qaboos and the US government for a solution to the question of Guantánamo detainees, 10 of these detainees arrived today in the sultanate to reside here temporarily,” the ministry said, quoted by the official ONA news agency.

The US defense department did not immediately respond to questions about the transfer. A US defense official, speaking on condition of anonymity as the transfer had yet to be publicly announced by the US, confirmed to the Associated Press that the prisoners had been sent to Oman. The official declined to elaborate.

The latest transfers would leave the number of Guantánamo detainees at 45, based on figures the Pentagon issued when four Yemenis were sent to Saudi Arabia on 6 January.

At the time Obama’s press secretary, Josh Earnest, said he would expect “additional transfers” before the Democrat hands power to Donald Trump on 20 January.

The sultanate of Oman, on the eastern edge of the Arabian peninsula, accepted 10 Yemeni Guantánamo prisoners in January 2016 and another six in June 2015. Oman’s neighbour Saudi Arabia took four prisoners on 5 January, and the United Arab Emirates took 15 prisoners in the largest-single transfer during Obama’s administration on 15 August.

Oman, ruled by Sultan Qaboos bin Said since 1970, has served as an interlocutor between the west and Iran. It also has negotiated a number of prisoner releases in recent years for western countries.

Yemen, the Arab world’s poorest country, remains in the grip of a civil war, with the Saudi-led military offensive against the rebels making returning Guantánamo inmates there impossible.

Obama vowed to close the Guantánamo detention facility in 2009, arguing that detention without trial did not reflect American values.

Faced with Pentagon foot-dragging and stubborn Republican opposition, his administration has focused on whittling down the number of inmates. Trump has called for a freeze on transfers.

On 3 January he used Twitter to say: “There should be no further releases from Gitmo. These are extremely dangerous people and should not be allowed back on to the battlefield.”

The US began using its military base on Cuba’s isolated, rocky south-eastern coast to hold prisoners captured during the Afghanistan invasion, bringing the first planeload on 11 January 2002. At its peak under the administration of George W Bush, 18 months later, the facility held nearly 680 detainees.

There were 242 prisoners when Obama took office. A September report released by the Office of the Director of National Intelligence said 122 of 693 detainees transferred out of the prison, or 17.6%, returned to fighting. An additional 86 detainees were suspected of having returned to the battlefield.

The majority of Guantánamo prisoners released have been sent to Afghanistan, Saudi Arabia and Pakistan.